by Eva Balogh and Olly Gruner

Glamorous, welcoming, stylishly attired – the usherette was once an integral part of the cinema experience. Immortalised as symbols of fantasy and desire, they are fondly remembered for lighting the way to a world of dreams.

Over the past two decades, Eva Balogh has been researching the history of the cinema usherette, and one of the most important contributions to this research was the interviews she conducted with several women who had worked as cinema usherettes in Portsmouth during the 1930s and 1940s. This month, staff and students at the University of Portsmouth honour them with a new exhibition. Stars in the Aisles examines the usherette’s central role in 20th century film culture with a fascinating display of photographs, film and objects. Inspired by Balogh’s interviews and drawing on materials obtained from local and national archives, the exhibition presents a history of usherettes in Portsmouth and across the UK.

Through the Great Depression and World War II, millions sought solace at the movies. This was the golden age of cinema going, when auditoriums were regularly filled to bursting and queues formed around corners. Molly Rowe, usherette at the Regent, London Road, recalled people attending cinemas two or three times a week: “They would do what they call ‘the rounds’. They’d do perhaps the Regent on one day and the Odeon the next, or the Majestic, and then there was the Shaftsbury.” The cinema was a sanctuary 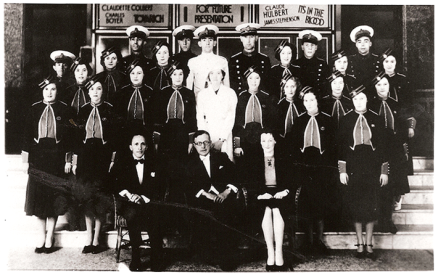 away from the hardships endured by many of Portsmouth’s residents during this period. They went to socialise, to court, to keep warm (hard to imagine now that an afternoon at the flicks was once a cheap alternative to heating the house).

Above all, these grand “picture palaces” offered an opportunity to indulge in a little Hollywood make-believe. Their sumptuous interiors seduced patrons with the promise of far-away lands and rip-roaring adventures.

Usherettes were very much a part of this fantasy world. Betty Weston, who worked at the Rex on Fratton Road and the Tivoli on Copnor Road, described how stylish and attractive her uniform was: “green with orange reveres and a kick pleat on each knee. A little green hat with orange round it, like a pillbox. And the gold at the Tivoli! We had a wide sort of cuff done in orange, with gold braid on the cuff.” Not unlike military procedures, the working day would begin with an inspection parade. All the usherettes would line up as the cinema manager walked past. “If he thought you had the wrong sort of lipstick on or something, he’d say ‘Go and take that lipstick off!’ You couldn’t have anyone there who was scruffy!”

Rarely was anyone scruffy. Indeed, the interviewees expressed how much they loved the fact that their job allowed them to dress up for the occasion. Vera Ayres, who cut an elegant figure at the Ambassador, Cosham, in the early 1940s, remembered her uniform affectionately: “You felt nice in it… You used to get lots of dates. People used to, fellas used to, you know…”. “Some of the men thought we were there for their entertainment”, recalled Margaret Hunt, usherette at the Shaftsbury, Kingston Road. “We had to stand our ground with them.”

Behind the uniform and pleasant smile, however, was a woman who had to work hard for her living. The job demanded long and unsociable hours, perhaps not unlike today’s cinema workers, but back then there was no legislation on equal pay or equal opportunities for women.

All of the usherettes interviewed came from working-class backgrounds. Most left school in their early teens. Molly joined the Gaumont when she was 14 in order to help her mother out with the bills. Youngsters learning the ropes started as “chocolate girls”, selling confectionary and cigarettes from a tray. “Chocolates were tuppence a bar and I think cigarettes were sixpence for ten and a shilling for twenty”. As a chocolate girl, Molly made eight shillings a week plus commission – which could add up to as much as half a crown. “I was thrilled to bits with it! It was pounds to me.”

An experienced usherette would have to take her turn as “ice-cream girl”. One of the less fondly-remembered tasks, the ice-cream girl would travel the aisles during the interval, often finding herself overwhelmed by swarms of hungry and thirsty customers.

The women still found time to have some fun though. Vera spoke of an evening when she and her colleagues were clearing the cinema and found a bottle of port. “Somebody forgot it and left it there. So we had it! Of course we all got drunk. The boss didn’t know.”

Through wars, economic crises and political and social upheaval, the commitment, courtesy and camaraderie of these women ensured the well-being of the picture palaces. Every visit to these establishments was a pleasure, before even the first reel had spun.

Florence Wall, usherette at Cosham’s Ambassador and Carlton cinemas in the 1940s, admitted that she “would have loved to be a film star. [Being an usherette] was the nearest I could get to it.” And though Mrs Wall and the other interviewees may not have appeared on the silver screen, their presence was as essential as any Bette Davis, Joan Crawford or Vivian Leigh. It is time to shine a spotlight on these unsung stars of the pictures.

Eva Balogh (Eva.balogh@port.ac.uk) is a Senior Lecturer in Visual Culture at the University of Portsmouth. Her research focuses on gender representation, film and women’s history. She has worked on various cultural history projects, including an extensive collaboration with Portsmouth City Museum, which examined leisure activities of the 19th and 20th century.

Olly Gruner (Oliver.gruner@port.ac.uk) is a Lecturer in Visual Culture at the University of Portsmouth. His research focuses on film history and cultural memory. He is particularly interested in contemporary film representations of the 1960s, and has published essays on the subject in various journals and edited collections.

One thought on “Stars in the Aisles: Portsmouth Cinema Usherettes in the 1930s and 1940s”